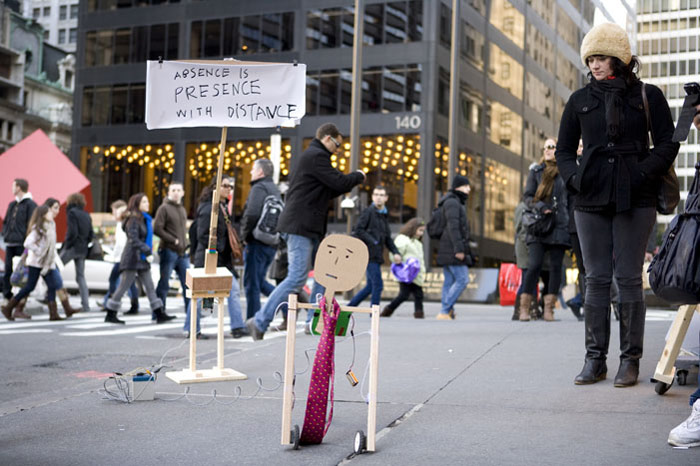 Taeyoon Choi’s recent series of kinetic sculptures are automated denizens of New York’s Financial District, conceived in a response to Occupy Wall Street and the subsequent removal of the protestors. After the camp was ejected from Zuccotti Park, Choi built Occu-bot, a simply constructed automaton with a stick-figure form and a moving sign. As a machine, Occu-bot could protest where humans weren’t allowed to. Management-bot, also known as the Financier, is the counterpart to Occu-bot. It is mobile and programmable, and bears the motto: “Management desires Management of Managements.” Barking-bot is a megaphone dog that confronts the Occu-bot and protects the Management-bot, with an amplified mp3 player and a body of found wood and wheels. Barkingbot is not able to make noise in the public space according to New York law, but it can still serve and protect Management-bot. (Adapted from the artist’s statement) 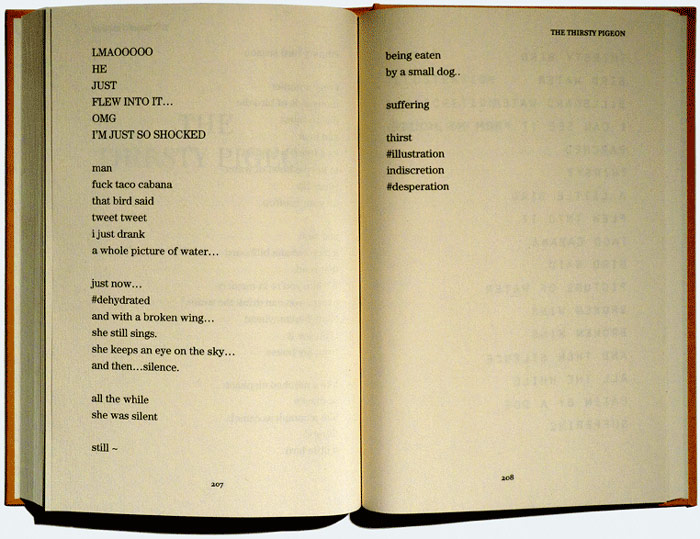 Plagiarist is game in which participants to re-tell a fable as a string of twitter tweets. Select a fable as your source fable. Read it. The first sentence of your source fable is its source sentence. Use a few words from it as a search string. (The essence of “a hungry fox was in a vineyard” might be the search string, “fox vineyard.”) Query twitter for your search string. Examine the search results for a tweet reminiscent of your source sentence. Plagiarize the tweet, copying and pasting it from twitter into a blank word processor document. This is the first line of a cleptostruction. Continue plagiarizing, stringing tweets together, one by one, until something recognizable in spirit to your entire source fable is cleptostructed. (Adapted from artist’s statement)

Kate Steciw’s work explores the complex relationships of objects, images, and words created by the social and commercial networks of the internet. Her digitally altered photographs and collages combine images according to the fitful logic of hermetic associative chains, to give a visual form to the internet’s opaque insides. Her sculptural object Live Laugh Love is a deformed tchotchke purchased from Amazon. The iron letters spell out the alliterative injunction of the title—a visible, hefty reminder of the ideology of personal desire. By working with words as physical forms to make an abstract, three-dimensional image, Steciw visualizes the twisted path from keywords to things—mediated by images—in the algorithms and warehouses of Amazon.

When Laura Yuile was given free use of an empty retail unit next to IKEA until it was leased or sold, she took the juxtaposition of the abandoned store and the functioning IKEA as a foundation for considering how art is instrumentalized in order to structure, order, and upgrade space. The logic of granting artists empty spaces is that the production of artworks inside them makes them more attractive to potential buyers and the local community. In collaboration with Jocelyn McGregor, Yuile organizes three-day events, with symposia in IKEA and follow-up discussions in the vacant retail unit, which is also used as housing for the participants. IKEA’s promise of “wide open living” with “no wasted space” sets the tone for a discussion of how these ideas relate to artistic and intellectual life, while the uncomfortable act of hosting in IKEA’s spaces—and sleeping in a retail unit with a group of invited strangers—raises questions regarding ownership, freedom, responsibility, uncertainty, and distinctions between reality and performance.

In the video shown at the exhibition, Jack McConville performs Kafka’s Metamorphosis in a bedroom display. (Adapted from artist’s statement)

Constant Dullaart has imagined a series of alternative internets: The Revolving Internet spins end over end as users try to navigate it. The Disagreeing Internet waggles in the browser window as if shaking its head no. The Censored Internet changes every character to an X. Each of his internets starts at the Google homepage: the default, the blank slate that, for many users, is the gateway to information and communication. In Dullaart’s internets—as in the one we’re all familiar with—the Google page is white, with nothing on it but a logo and an input box, in keeping with Google’s trademark style. But while Google tries to be invisible to the user on the surface, it has enormous control over the information that it delivers. By playing with the surface, Dullaart offers a reminder of how flexible and strange a default can be, and of the quixotic connections that it hides. Among his versions, The Sleeping Internet is particularly poignant; dimming and brightening to the rhythm of a sleeper’s breath, it injects a human warmth into a cool and empty site. 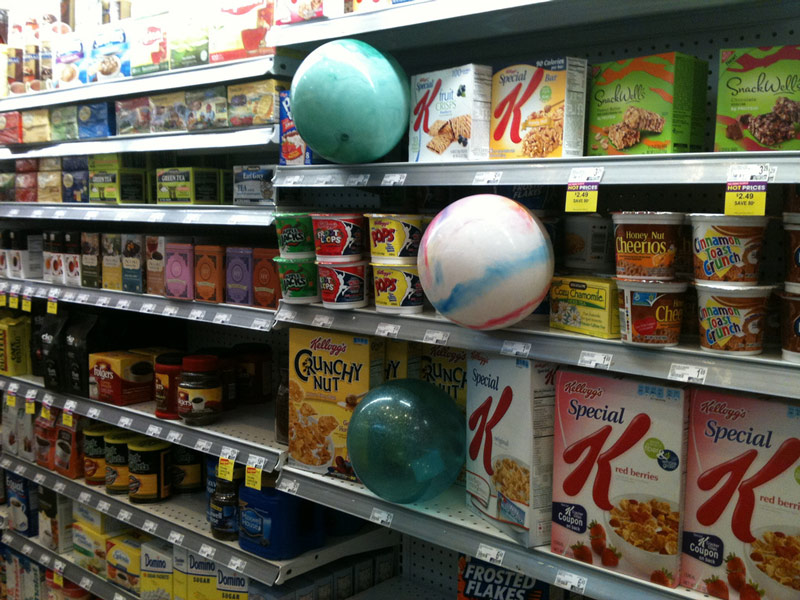 Duane Reade is a group of artists who came together to make things they are not supposed to. Their first ongoing collaboration takes place in corporate chain stores, where they use consumer products to make art (Artists’ statement) 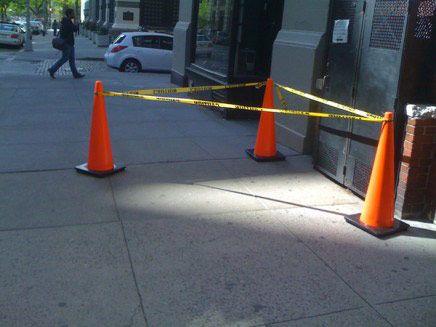 Joshua Clayton and Alexandra Kuechenberg sought to spontaneously rezone everyday urban space with the appropriation of industrial-grade construction objects. The messages coded in traffic cones, caution tape, and orange flags are sufficiently authoritative to subvert normal pedestrian flow—even in unorthodox places. With these objects positioned in various configurations, passerby felt compelled to address strangers as they navigated unexpected detours or blockade. The artists’ intent was to observe how people responded to these decontextualized encounters in parks, sidewalks, and other interstitial spaces of leisure and low-urgency transit. (Adapted from the artists’ statement)

Mitch Patrick’s Sol_54_Bathurst_19:16:13 is from a body of work that engages current events perceived exclusively through the transmission of digital images. By redesigning every phonetic character used in the ASCII code, Patrick creates marks that remove the legibility from the original set of English ASCII characters. These symbols are then used to encode images that are transferred to surfaces through digital fabrication and printing. His “neo-ASCII art” is inspired by the German term Bildpunkte, or “picture-point.” He creates unique sets of bisymmetrical symbols to better understand the experience of visual history through digital propagation. Patrick is particularly inspired by Vilem Flusser’s idea that technical images will eventually supersede textual communication. The content in Sol_54_Bathurst_19:16:13 was taken from NASA’s JPL website, which provides raw images from the Curiosity rover mission on Mars. The image is a close-up of a rock named “Bathurst Inlet,” which was only physically seen by the Curiosity rover’s Mars-Hand-Lens-Imager-Camera some 225 million kilometers away. (Adapted from the artist’s statement)